The day finally dawned and we were on a roadie heading north out of Auckland; our destination - the quieter roads of the Far North. For Daniel and I the Far North we explored was like reconnecting with the New Zealand we experienced as kids. The predominantly Maori-owned land has ensured development has been concentrated in just a few coastal areas. As our itinerary spent little time in such coastal developments our holiday was like a delightful step back in time. 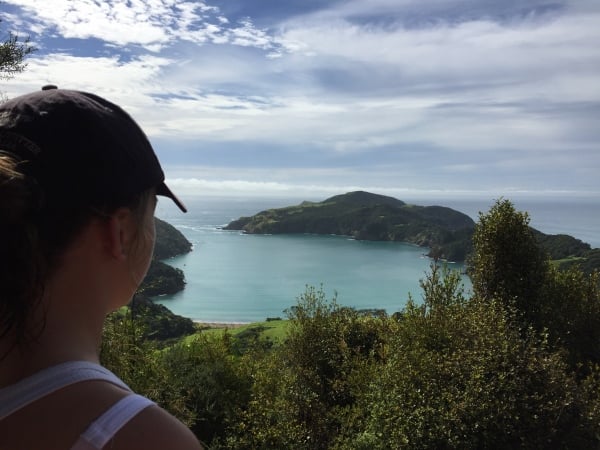 After a reasonable drive north from Auckland with a few pit stops along the way; one pair of sunglasses left behind in a shop by one child, all children told there will be no such thing as McDonald's on this trip no matter how many golden arches we drive past and repeated policing of who’s turn it is to listen to their playlists, we arrived at our campsite for the night. The tree-lined beach beckoned us South Islanders to take a pre-dinner dip. There had been discussions of enforcing a compulsory swim for everyone each day, but we certainly hadn’t anticipated that we would all be running for the sea on the balmy March evenings. 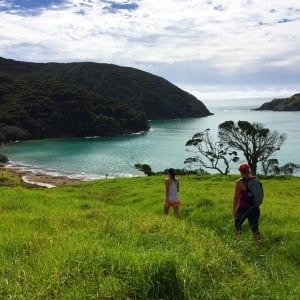 While we had the trip notes from our Far North Kiwi-style tour and knew we had an extra day up our sleeve, possibly what we didn’t comprehend was that extra day didn’t equate to an extra couple of hours each day. This was our holiday after an incredibly busy summer season so we were in no rush the next morning. We started our hike at 10am and by noon we were frolicking in the waves for the first swim of the day (first for the adults that is, the kids all swam before breakfast). The hiking was pleasantly more challenging than I thought it would be and the beaches seemed to be perfectly placed to break up the journey. The historic whaling station was a real relic and we all enjoyed fossicking amongst the ruins. With all the relaxing beach time, exploring rock pools and then enjoying a well-deserved corona as the last of the afternoon sun dipped behind the hill, we then looked set to arrive at our next campsite after dark.

A quick look around Russell as diners made their way to various quaint outdoor restaurants did leave us wishing we could stay a little longer, alas we had a water taxi to catch. The car ferry was a real highlight for the kids and the twinkling of lights made for a very picturesque 15-minute jaunt across the water. Being fully self contained with a foldout table and lights on our trailer meant we dined on the waterfront in Paihia and didn’t need to rein any of the kids in as they galloped up and down the beach. It was 10pm by the time we pulled into camp; we rocked up at pretty much the exact same time as a thunderous rain cloud. The rain stayed for precisely the length of time it takes to put up four tents.

Waking up in the morning and discovering we were perched atop an endless white sand beach was special. We had the option of kayaking or just 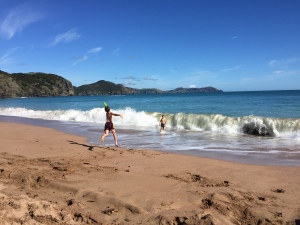 hanging at the beach and enjoying the waves. We chose the later and were entertained as we watched fellow campers trying to launch their new P-class yacht off the beach. The men in our group assisted and they finally made it through the breakers. We had no intention of leaving at dusk as we had tides to time for our journey along Ninety Mile Beach.

This beach is an official highway but only suitable for 4x4 vehicles and you still need to time the tides right. There is something almost hypnotic and quintessentially kiwi about driving along this beach knowing that it is legitimate highway. We were in a 4x4 van towing a trailer so drove reasonably sedately up the beach and just watched on as some enjoyed doing a donut (360) in the sand.

Watching the sun go down whilst perched on a sand dune with this never-ending paradise of beach stretching both north and south was an unparalleled experience for us all. This holiday was getting better and better everyday.

Adrenalin day dawned bright and sunny. We continued up the beach before heading inland to Te Paki sand dunes. It was bliss being there before the tour buses arrived so we felt like it was our adventure, it did also mean there was no one else sandboarding and able to reinforce what Dan kept trying to tell us. Dan went into detail that we had to fly down the sand dunes, and how we would catch a wave on a boogie board and use our feet as brakes when needed. Alas the other Dad disagreed, “no, no, no you want to sit on the board and get maximum speed.” We had so much fun, numerous crashes and little bit of blood for the disagreeing Dad. As the tour buses arrived we retreated to our vehicle for a cook up of bacon and egg pita pockets. Dan felt vindicated as one of the tourist bus drivers pointed to our children flying down the dunes completely out of control and announced to his charges in no uncertain terms …”do not do it that way!” 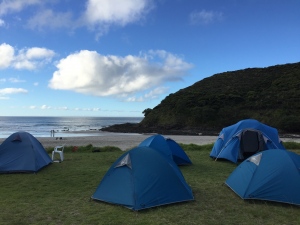 As the adrenalin abated we headed for New Zealand's northernmost campsite: Tapotupotu Bay. With tents erected overlooking the stunning bay we dusted off the boogie boards and took to the water. The campsite was busy as it was Easter Sunday, alas our Easter bunny had left the Easter eggs in the freezer at the campsite two nights ago. Not much lost as they had melted into rather deformed looking chocolate creations. The soft white sand was the perfect grounds for a bit of family vs family ball sport. With spectacular tackles and some superb chip and chase maneuvers we had to admit defeat to the Lucas family.

Cape Reinga, where the two oceans collide is steeped in cultural significance as the spirits of deceased Maori depart New Zealand shores on their journey to Hawaiki, their ancestral homeland. As the trip notes suggested, arriving at Cape Reinga is a zillion times better on foot rather than joining the hordes of tourists for the descent to the lighthouse. We were fast learning that timing was everything and having the local expertise (in the form of trip notes) from our North Island co-owner was what was making our trip such a fantastic holiday.

The journey back to Auckland over the following couple of days took us on yet another car ferry across the beautiful Hokianga Harbour and through some gorgeous rolling farmland. Tane Mahuta (Lord of the Forest) impressed as our largest known living kauri tree, as did Te Matua Ngahere (the Father of the Forest) as we grappled with the knowledge that it was a sapling some 2500 to 3000 years ago during the bronze age. 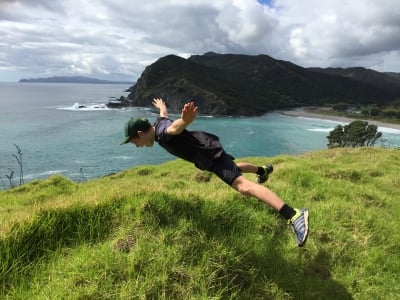 We failed on our quest to spot kiwi on our night walk in Waipoua Forest, but succeeded in spotting numerous underwater creatures at New Zealand’s first and most accessible marine reserve just north of Auckland. Pointing out the stingray to my nine-year-old as we snorkeled past did result in me having to do some serious water treading whilst trying to prise my daughter off my head.

Taking our place in the queue of traffic as we rolled back into Auckland was made all the more bearable by what we had experienced over the last 6 days. The Far North impressed us all way beyond our expectations; the subtropical atmosphere, the endless coastlines and glorious countryside left us all feeling fulfilled, relaxed and eager to ensure it is not the last time we explore the hidden gems of the winterless north.