Keri Welham stretches her legs and her confidence on a two-day tramp  over Cass - Lagoon Saddle in Arthur's Pass, near Arthur's Pass. 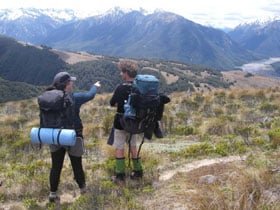 There are easier ways to get advice about your cat. Crossing a river, arms linked and wading through thigh-high rapids, I suddenly realised Chris could help. My guide on a tramp across the Cass and Lagoon saddles, east of Arthur's Pass village, was a veterinarian.

Chris Steel, co-founder of the Animates pet shops, decided about a year ago that it was time to live his dream: guiding active and enthusiastic people through New Zealand bush and back country. He joined Hiking New Zealand, a Christchurch-based company that runs bush safaris, from gentle initiations to challenging multi-day odysseys.

In Chris's expert opinion, Evan the feline assassin has "a little bit of Satan" in him. With an assessment like that, I wouldn't trust Chris and his euthanasia needle within 100 metres of my misunderstood cat, but I'd trust him with my life in a southern mountain range where the weather can change swiftly.

The Cass Saddle tramp is only two days, but it includes river crossings along a route that in parts is marked only by occasional piles of stones. This was my first overnight tramp in almost a decade and it was well beyond what I would have attempted without Chris's help.

The team of three was Chris, me and Hiking New Zealand marketing manager Anne Murphy. I noticed a subtle disparity in the way food was divvied up. It appeared I would haul the equivalent of two tomatoes, while Chris and petite Anne lugged a set of kitchen cooking utensils, pots and camp stove. 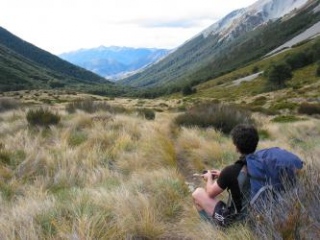 The trip mostly had the atmosphere of an adventure with mates but Chris deftly interspersed our chatter with briefings about where we were heading, how long it was likely to take, the wildlife and the terrain.

We tramped through Craigieburn Forest Park. The first day took about five hours, along the Cass River into beech forest, with a steady climb to the top of Cass Saddle.

It was never so difficult that we had to stop, but Chris manufactured pauses when we took off our boots to dangle our feet in a stream or sat on a rock to admire the shades of green. I was shocked to learn that you could safely drink from the streams (obviously not when your tramping companions are soaking their stinking feet upstream). Somewhere in my childhood I'd been told that every New Zealand stream was contaminated by giardia, and had steadfastly observed nil by mouth from every bubbling stream I'd encountered since.

At Cass Saddle, Anne made me a fresh ham and salad sandwich. I was too busy patting myself on the back to make my own lunch from the fillings laid out on a flat rock. We sat, crouched in the alpine grasses above the bush line, surveying the Craigieburn range. Here, the wind wrenched at our clothing and tore at our hair. It was a brisk, raw moment in the elements.

The descent to the flats at Hamilton Creek was swift and before I knew it, we were spreading sleeping bags on mattresses in the hut bunks.

We took an evening stroll to Mirror Lake, up a determined path near sheer drops where cliffs had crumbled. Dinner was a succulent Thai green curry with chicken, steamed rice and mulled wine brewed on a camp stove. I blame dehydration for the swift effects of the alcohol.

Dessert was steamed pudding but we didn't need it. Instead, we went to bed early and I vowed not to go anywhere near the composting toilet at night. Even in my tipsy state, the buildup in it freaked me out. An Israeli tramper, ill-equipped in sandals and with only a thin blanket, lit the fire to cook his two-minute noodles. 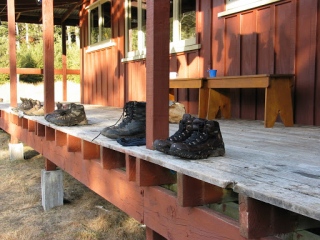 Hamilton Hut is surrounded mountains; a location so perfect in its isolation a man from Tokyo had happily camped out there for three days by the time we got there. His plan for this day was nothing more than reading a book and enjoying the precious silence. We ate muesli and fruit and drank tea, then started out early.

Fairly soon after setting out we encountered a swing bridge. It was high and challenging but there was no way I was turning back.

Day two was an eight-hour adventure. We crossed rivers, following cairns and the odd marker. We passed West Harper Hut, one of the oldest huts in the region, with its old sacking bunks. We ate hard jubes to give us energy and a few hours later stopped at Lagoon Hut for a lunch of sandwiches, toffee pops and tea. We climbed to Lagoon Saddle, along boardwalks to protect the fragile environment, and emerged to views I hadn't expected. Arthur's Pass opened out before us — valleys and peaks, snow and forest, slips and rivers. I was stunned. I had always imagined these sights were only accessible to the very fit and the very adventurous.

The descent to Arthur’s Pass Wilderness Lodge was swift, through wilding pine.

Hiking New Zealand runs a four-day option which includes two nights at the lodge and return to Christchurch on the TranzAlpine train. At the lodge, guests are treated to four-course meals, informative walks and canoeing trips.

Hiking New Zealand's general manager (and Anne's husband), Daniel Murphy, says that over the past 15 years the company has developed hiking tours for many fitness levels. The trips have at most 11 trampers and run on set departures, mostly from October to April. About 95 per cent of customers are from overseas but the company is keen to get more Kiwis into the back country.

At the end of my walk, I believe I stank, my legs were pockmarked with sandfly bites, and I suspect I managed to put on weight despite all that exercise, thanks to the gourmet feeds. But I was euphoric. I'd walked part of the proposed Te Araroa national walkway, scaled two saddles, slept in a basic hut with an overflowing composting toilet, got drunk on one metric cup of wine, seen a New Zealand falcon and heard a kea, conquered a three-wire bridge and a scary swing bridge, and reconnected with my tramping boots for the first time since Indonesia, circa 1999. If anyone’s asking, tramping and I are officially back on.