Office to Outdoors - on the Job - Part 2

German-born Eva Starostka is a tourism student from The Netherlands, in New Zealand to write her thesis and gain work experience. 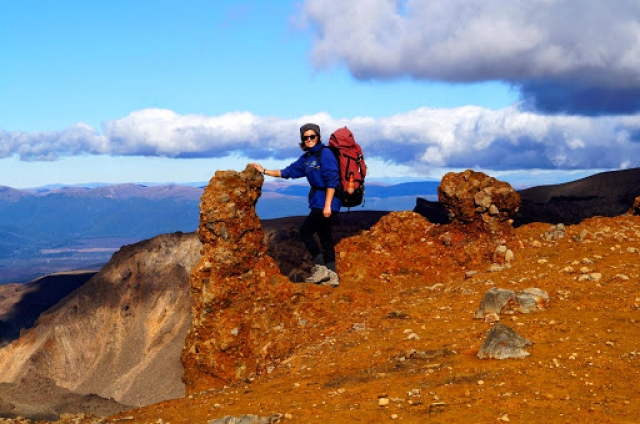 "Finally! Today is the day! We are going to do the Tongariro Crossing! And the weather is perfect, no clouds in the sky. What a thrilling day!! And we will also get a new group member who will join us for the trip! Awesome... finally a man, who will hopefully carry all the weight."

Luke was a professional photographer who was originally from China but lives in Hamilton. A very handsome and funny man, but all my hope faded away quickly... I had to carry as much as he needed to.

We started our trek, climbing through podocarp forest by following a stream that is naturally polluted by thermal activity. Thus we were not allowed to drink it. After a few kilometres the trail continued up the slopes below the north crater of Tongariro. Slowly the active volcanic hazard zone begins... all of a sudden I realized that all the craters around me are evidence of flying rocks from the 2012 eruption (Te Maari crater). We started to climb up steps, thousands of steps, or millions. I am already gasping for air... but is it because I am tired or because of the amazing scenery which takes my breath away? All at once, the weather changed. No sun, no sky, no mountains... nothing. We continued walking; the only thing I could see was the person in front of me. It was incredible, magical but also scary. Where was I - on another planet? 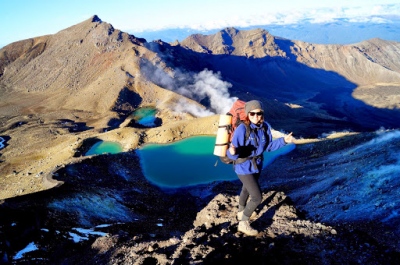 After climbing up the terrific Mount Tongariro (the sky was clear again), we finally arrived at the Blue Lake and Emerald Lakes. What a stunning, mind-blowing view. It was better than expected. All the people around me were silenced. You could tell everyone was enjoying the scenery. We sat down at the edge to have a long, close look at the Red Crater, our feet touching snow... SNOW? Oh wow, it was the first time in a year that I had seen and touched snow - what a pleasure!

Our hike carried on with a steep climb down through a volcanic moonscape of contorted lava flows and ash fields until we reached our hut: Oturere.

Am I on the moon?

Early in the morning we started our hike to the Waihohonu Hut, which was about 7 kilometres away, a walk on, literally, the moon.

Arriving at the hut we all felt relieved. We couldn't wait to have lunch, to relax for a while and play some card games, but unfortunately our eyelids dropped as we grew tired. We all had a short nap to recharge our batteries. We left the hut for a short walk to the bubbling stream - this time without our backpacks. After Kath had told us that the stream "makes you a year younger when you jump in" everyone was keen to jump in. NOT! There was no movement at all. However, I felt like a little adventure again and talked everyone around until we ended up in the stream, well... our feet. 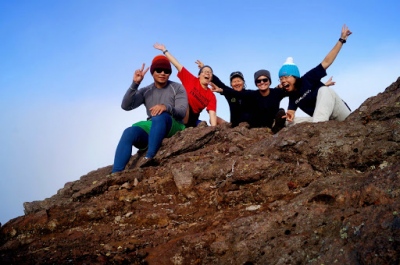 Throughout our journey we mutated from little ants to rescuers, heroes and moonwalkers, until we finally became "real" HIKING NEW ZEALANDers.

On our way to Wellington we reflected on our ten days, which were full of excitement, joy, happiness, pleasure, fun, ambition and effort. We saw places we couldn't dream of, we climbed up mountains we didn't expect to reach, we cooked together (Khorly's first time cooking), we collected firewood and we lit fires. But the most unexpected gift we received was - friendship.

Thank you for this amazing opportunity Anne, Dan and Malcolm.