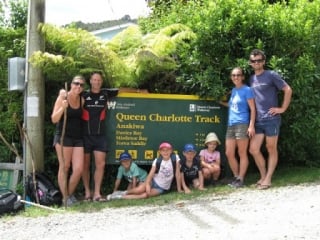 The cool waters of the Queen Charlotte Sounds beckoned this summer and what better way to explore the sounds than by foot. Our two gorgeous kids have loads of energy and there is no denying Daniel and I cannot sit around for too long, so we wanted to plan a holiday that would keep us all happy. 71km of hiking sounded like the perfect answer, add to that a water taxi service to take our gear from campsite to campsite and there was not a moment's hesitation. The water taxi  was a huge draw card as there was always an option should one of the children 'blow out', get ill or the weather make it unbearable for the youngest of the group.

We love hiking with our kids, and our kids love hiking with other kids. We teamed up with another family and started planning our adventure. As we were staying at most campsites for only one night we decided to take two two-man tents per family. This made for the perfect opportunity to teach both the girls and boys how to pitch and take down a tent and the reasoning behind leaving your sneakers in the vestibule! 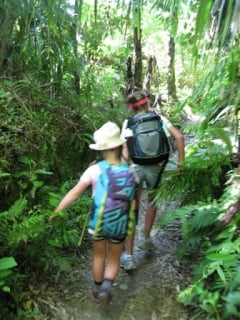 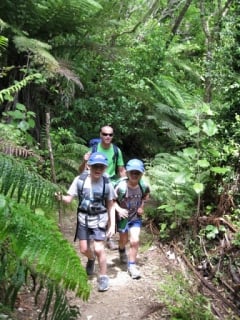 The excitement was high when we met up at the water taxi for the boat ride out to the start of the track. We hardly saw the four children for the first part of the hike from Ship Cove as they scampered up the hills, fought over who's turn it was to be leader and searched for the perfect walking pole. The call for snack stops was relentless and had me concerned I may have totally under budgeted the snack allocation. The friendly wekas kept us entertained as they attempted to check in any open bags on the ground for their share of the snacks when we stopped to rest. As mid-afternoon rolled around we reached Furneaux Lodge and the calm waters and relaxed atmosphere of the place beckoned us not to rush to our campsite but to come and enjoy a swim and a glass of wine. We toyed with the idea of whether we were 'cheating' to be enjoying a drink in such a tranquil place when we were meant to be hiking but why deny yourself something when it is at your finger tips. 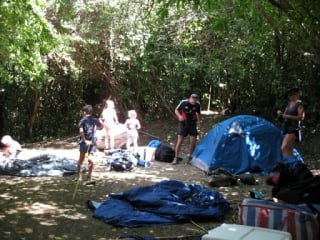 Once at the campsite there were a few lessons on how to pick a good tent site and pitch a tent and then all hands were on deck to cook a lovely meal. The food on day one of any hike is always a little better than the others, so the freshly dug potatoes and fresh peas were the perfect accompaniment to the pan fried lamb. When you can have a chilly bin transported for you, you would be crazy to be eating freeze dried meals. There is plenty of time for freeze dried meals on more remote hiking trips.

The next morning was a relaxed affair until the hikers who came in very late the night before asked us what time the water taxi would be at the jetty to pick up the gear and whether we could ask them to wait as they were running late. We assured them it would be no problem as the water taxi wasn't due until after 9am, the somewhat puzzled look on their faces made us find the one member in our group with a watch (all phones were switched off and packed away). We then understood the need for action but relished the fact that we were all so relaxed and already in holiday mode - this was never going to be a 'hard core tramp.'

By the second night the kids could put up their tents by themselves and were tired enough to stop whispering until late into the night. Day three required an early morning start as the days were hot and we had somewhere between an eight and nine hours of walking ahead of us with no opportunities for swimming. This was the day we thought our six-year-old might be better to catch the water taxi with Mum, but she was going great guns so we thought we would give it a go but only take one pack between the parents so the other could give her a piggy back if required. The day dawned a little cooler than the first two so the climbing was not as intense as we imagined. We kept the snack stops frequent and chatter high spirited. The children were complimented along the way by other hikers who were impressed with their stamina and happy dispositions.

The Walkers Lodge at Portage was a welcome sight after eight and a half hours of walking. There had been some stumbling and mumbling in the final hour but spirits brightened quickly as everyone claimed their beds with fresh linen. We planned two nights at the Walkers Lodge so the children could have a break after the long day. There had been visions of kayaking and swimming on this day, however, it teemed with rain from the time we arrived. This worked out well as we had the shelter of a cafe and deep arm chairs in the lounge to watch the weather batter the sounds. 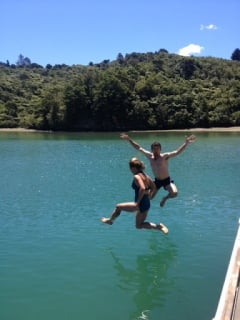 Having fun at Mistletoe Bay

Next stop was Mistletoe Bay and only four hours walk from Portage. The children scampered along the track and did Tarzan impersonations as we made our way off the main track and down to the water's edge. This beautiful and sheltered campground prides itself on environmental sustainability. The tents were pitched in record time so we could all take the quintessential leap off the jetty into the aqua waters of the Queen Charlotte Sounds. The children jumped at the chance to hire kayaks and spent the late afternoon paddling around the calm waters of the bay. A couple of the adults took this chance to head off on a run to Anakiwa and whilst pounding/shuffling away on the track contemplated the potential of a camping holiday with bikes, running shoes and kayaks at Mistletoe Bay next summer. One of the great things about children is that they believe their parents are incapable of suffering from fatigue, so after the 25km run it was straight into a game of Frisbee with wild throws by children and adults alike, requiring an array of contortion moves to catch the thing.

The final day saw the Mum's head off with the kids on the track to Anakiwa whilst the Dad's relaxed in the sun and caught the water taxi back to Picton with all the gear. They collected the vehicles and drove around to Anakiwa. As we were heading to Golden Bay after the walk we planned it so the children could miss half an hour of winding roads.

It was high fives all round when the track was completed. 71kms of walking and loads of special memories to take away. It was a relatively 'soft' adventure and there were plenty of creature comforts which ticked the boxes for what we were seeking from this holiday - build the children's love for hiking and let the adults unwind from work.