My amazing time on the Northland Discovery *Part 4* 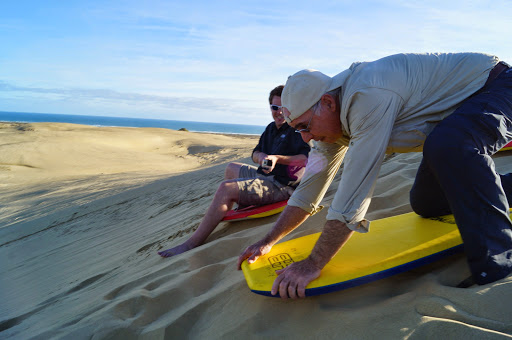 Read the fourth part of his Northland Discovery adventure "If you go down that one, you die!" below:

If you go down that one, you die!

This morning we got up and cooked an old fashioned breakfast with eggs, bacon (NZ bacon not USA bacon), toast, and a spread of toppings to choose from. I really wanted to cook them some good ole Mynot Chocolate Gravy, but we didn’t have any biscuits or the stuff to make the gravy. If I’d have known we were going to cook breakfast like that I’d got everything earlier when we were at the store and gave it a whirl.

After breakfast, we headed out to Te Werahi Beach for a nice little 3-4 hour stroll along the coast. We walked down the beach then headed up through the mountains around the edge of the cliffs along the water. There were some speculator views with hundred foot cliffs on one side and forested mountains as far as the eye could see on the other. We eventually made it around to Cape Reinga Lighthouse which stands overlooking where the Tasman Sea and the northern Pacific Ocean kiss each other. 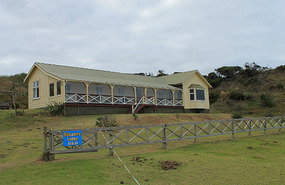 We drove on to Tapotuputo Beach for some lunch and relaxation before getting to the big adventure of the day.

When lunch was complete, we packed up everything and headed for Te Paki to do some sand boarding! Sand boarding is something I’ve never done before but I suspect they might do it out west (where there’s plenty of sand, of course). It’s where you get what looks like a boogie board, you climb up the largest sand dune you can find, you lay on your stomach, and you ride it all the way to the bottom. Although that might not sound like much to most folks, but these sand dunes can get massive and you can easily get going 40-60 kph (25-35 mph) down these things. So what did I decide to do of course…well me and one of the girls decided to skip the teaching points on how to control yourself, brake, and stop (cause who needs to know that stuff anyway!) and go climb the tallest sand dune in the whole place. Once at the top our guided shouted up at us “If you go down that one, you die!” We had more of a craving to go down this thing than dad does for a glass of sweet tea right about now. But don’t worry mom, we didn’t try it, but it wasn’t because the guide said don’t do it. It was mainly due to the fact that at the bottom was a thicket full of trees, bushes, and who knows what else and we preferred not to use our heads as brakes when we hit the trees. 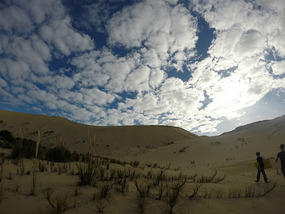 So, we opted to join everyone else over the other side of the dune where we had a little better landing spot but could still get going pretty good.

The first time we went down I about killed my partner. Like I said, neither one of us knew what in the heck we were doing so we just headed down side by side. Well, she got stopped for one reason or other about halfway down and she was just ahead of me and I almost took her out at 20 mph, but somehow I managed to steer just to the left of her thank goodness. I had a good video of the whole thing, but it got erased off the Go Pro. The next time we thought we could figure this thing out by coming up with a plan. So, we assumed it was basically the same as the kayaking we had done the day before…push down on the right - go right, push down on the left - go left, put both feet in the sand - stop. I’d like to tell you that this time turned out much better for both of us, but unfortunately all I can tell you is that you’ll have to watch the video to find out what happened. We then quickly discovered that the limiting factor on how many runs you can do is not whether you died on the previous run but how much endurance you have left to climb back up to the top. It’s quite a hike straight back up the dune to come flying back down in 45 secs or less; so, the third time was our last hoorah, and we were determined to get it right!

From our previous attempts, we had figured out what not to do real quick like, but we still wasn’t sure exactly what to do. This time we decided to slide back on our boards some and hopefully gain a little more control and maybe some more speed if possible. This turned out to be the best decision we had made all day. We went straighter, faster, and got more air time than a skateboard at the X-Games. To our despair, it was time to go after we were just getting ready to take our skills to the next level. Now, to answer the question on everyone’s mind…did my 64 year old dad load up on one of these death traps and see what happened?…why heck yeah he did! Truth be told I was a little worried about him. It wasn’t the speed that worried me though. It was the van you had to miss at the bottom of the hill, and even though that don’t sound hard to do, when you’re laying on your belly going 20 mph and all you can see is sand flying straight in your eyes and mouth, not to mention all the bumps and humps to get over, it gets quite difficult to focus on steering this train wreck. I don’t wanna spoil the best parts of this story; so, I’ll leave what happened to your imagination until I can get all the videos uploaded.

Once we got the sand halfway out of our rears and ears, we came back to the Hukatere Lodge where the nice inn keeper, Gabi, had supplies all ready for us to cook supper. 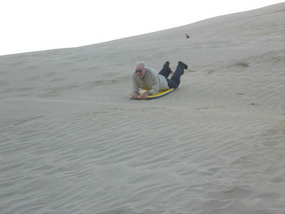 We all chipped in and made mashed potatoes, some kind of purple potato that tastes like a sweet potato, salad, carrots, green peas, and had bought us two desserts - one strawberry pie and one apple & blueberry pie. She also had picked up plenty of red snapper and potatoes which we grilled. It was amazing! Everything was so delicious especially after all the hill climbing we had done with the sand boarding.

I can’t believe that tomorrow is our last day of hiking New Zealand. These last 4 days have been the most fun of the entire trip when you consider everything we have got to do and the people we have got to do it with. It’s like the old saying goes - it’s not the destination that matters, but the journey that is important.