The Hiking New Zealand team consider Claire an honorary member. Not only did we first meet Claire when she was one of our concessionaire managers for the Department of Conservation she now joins Anne and Michelle as part of the Hiking New Zealand Spring Challenge adventure race team. Claire can now add guest blogger to her list of achievements.

Five DOC Workers had to be rescued from Arthurs Pass due to swollen rivers!  In a rare moment of sanity we decided then to change our plans for our girls tramping weekend and headed to the only part of the South Island without storms or severe gales forecast, Kaikoura.

The route we decided on was Mt Fyffe via Spaniard Spur returning via the Kowhai saddle and valley. 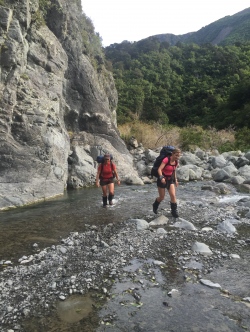 After a drive from Rangiora (approximately 30 minutes north of Christchurch) we arrived at a jam packed Mt Fyffe Car Park.  Having left a second tent behind, our concerns over lack of bed space at the hut were voiced.  We talked up sharing a tent fly and as it was so mild decided we would ‘Bear Grylls’ it if we had to!!  We also removed about 3kg of extra food from Donna’s back pack, apparently there just in case we got really really hungry, or she was left behind on her own!!!  We would only have done that if she started smelling really bad!

The walk up the riverbed to the Spaniard Spur turn off reportedly takes 1.5 hrs for everyone except groups of five girls who talk non-stop and don’t pay attention to some route markers.  You can not really get lost as you stay in the valley bottom until the start of the Spur track.  You just spend more time in the riverbed than you have to…..lesson learnt!!

It’s a pleasant walk starting off on grassy gravel beds and a well marked track which disappears to a route marked with Cairns and a number of river crossings.  We undertook this walk after an unseasonal dry period so the crossings were easy, if not a tad slippery as Kate found out very early on! 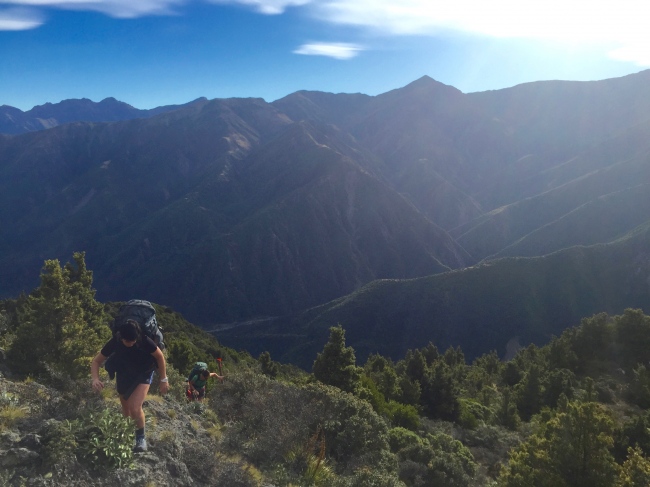 The climb up Spaniard Spur is steep, and a continuous slog with a pack on.  However, the huge advantage is how quickly you gain height and start to see an amazing mountain vista.  The climb starts in trees which soon turns to low lying bush and grassy knolls where the view really opens up.  It really is a ‘heads down arse up’ kind of track until it opens up where you can’t but help stop and admire the view…..and catch your breath.  Less than an hour from the start of this track we find ourselves at the top and on the main 4WD road that leads to Mt Fyffe Hut, 5 minutes away. 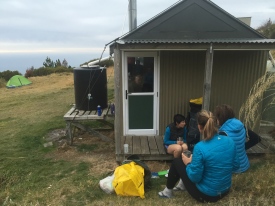 but I also appreciate that all New Zealanders need places they can go to see such iconic landscapes who may not be able to get there any other way.   I guess it’s a question of balance and ensuring all types of desired experiences are maintained over various locations, something I know DOC try very hard to achieve.

Mt Fyffe hut is an 8 bed hut an hour below the summit of Mt Fyffe.  It is a fairly basic
hut but is comfortable and has a fire.  To our surprise Bear Gryll’s aspirations had to be postponed as there were 3 beds left, and Anne and I opted to share the 2 man tent……which by the way had no separate fly (ref Day 1 Para 1)!!  Unfortunately for four guys who arrived just 5 minutes after us, they had to go back down as there were no beds!  Moral is bring a tent to this popular hut n a weekend, unless…..OK you got it…..enough of Bear! 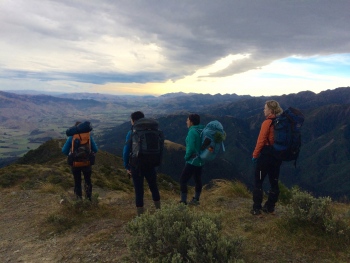 Apparently there are magnificent sun rises from Mt Fyffe hut…..  Missed it!  So after a strong coffee and instant porridge we were on the hour ascent to the summit.

It is an obvious wide track to start, steep in places and the summit arrives quicker than you think.  The views over the sea are fantastic as are the inland mountain views, but these only get better the more inland you go, maybe because you get a better sense of isolation.

By far the best section of the entire walk was the route from the summit to the saddle, which took almost 2 hours.  Increasingly devoid of vegetation it takes on that ’lunar feel’ you get on exposed ridges.  Sidling the ridge on the scree early on was easy walking with little loose rock to worry about.  Then the real fun begins.  The route takes you down a steep scree slope which for the majority can be tackled at reasonable speed with good judgement and foot placement.  Be prepared to brush yourself off and laugh at yourself as you end up on your derriere more than once…… 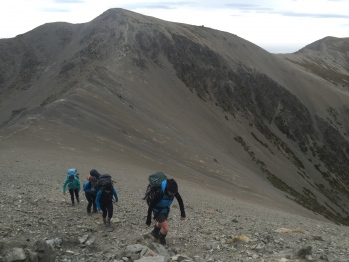 The route then climbs steeply for a short time before again descending down more fun loose scree which eventually becomes more interspersed with grasses as you approach the saddle.

Despite the sun the wind was bitter and picked up as we reached the saddle, according to Michelle this is called the Saddle Effect but my thoughts here had turned to horses! Neigh!

A delicious but brief lunch at the source of the Kowhai was followed by some serious route finding down the Kowhai…..yes us girls actually had to tone down the banter and really concentrate!  Not that easy I have to admit but we did a pretty good job.  I sometimes felt like an aboriginal tracker, looking for broken branches and trampled grass which disappeared into bush or up over boulders but it was immensely fun, and the varied terrain gave us a full body workout, a bit like cross fit, but in tramping boots and gaiters! 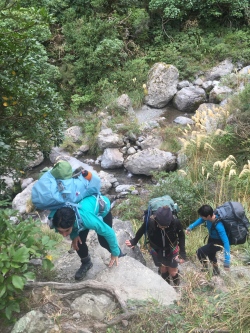 By this time Kate had fallen over numerous times on all terrain types, and now everyone else was starting to join this craze.  Wet wood under long grass was the main culprit but we stopped for a dose of sugar after our photogenic  ‘Camp Mum 2’ got all ‘Camp Mumsy’.

The walk from the saddle to the hut took a little over 2 hours (including compulsory sugar stops) and just before the hut the track headed through fairytale woodland with thick mats of moss either side.  The hut was located in a largish clearing within this area, a perfect sunny spot to devour Donna’s hut snacks…olives, cheeses, salami, crackers…… OK so we weren’t as harsh with the food confiscation as we could have been!!

The hut is pretty much Mt Fyffe hut’s twin, except it only has 6 bunks.  We were not too worried about this being full as it was reportedly only 3 hours walk out which we could have achieved on dusk if we had to.  As a Sunday night the only other tenant was Nigel, who we had chased down the valley, but maybe the prospect of spending a night in a hut with us was a bit overwhelming so he decided on the walk out leaving us to ‘attempt’ to party on our own (we had a small amount of wine left and some Drambuie – not enough for dancing on the table but enough to start the story telling and more importantly start the billy for a cup of tea!!!!!...a signal to bring the dark chocolate out.....). 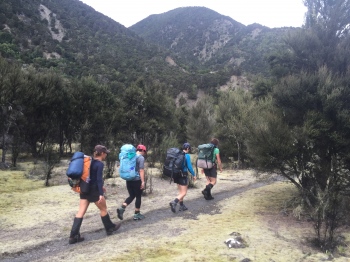 After hot coffee and cold porridge (as our MSR fuel ran out), and having a sweepstake on how many times Kate would fall over today(!), we walked out in brilliant sunshine via the Kowhai riverbed.  The first 35 minutes was new terrain from the hut to the Spaniard Spur turn off, followed by the same walk we completed on Day 1 from the spur to the car park.  This time it took 1.5 hours, at least 30 minutes quicker.  Whilst there was still a huge amount of natter going on at the back of the party whoever took a turn up front this time ensured we took more care at route finding and we found some great tracks off the riverbed which we had completely missed on Day 1.

We returned to an almost deserted car park, and ate some of Donna’s confiscated snacks, before heading to ‘The Pier Hotel’ in Kaikoura for a delicious lunch with views over the sea.  Then it was time to mentally prepare ourselves for our return to normality…school pick ups, after school sport, bath time, story time……….WHEN IS THE NEXT TRIP!!!!!!!!!!

Let us organise your custom group hike to Mt Fyffe