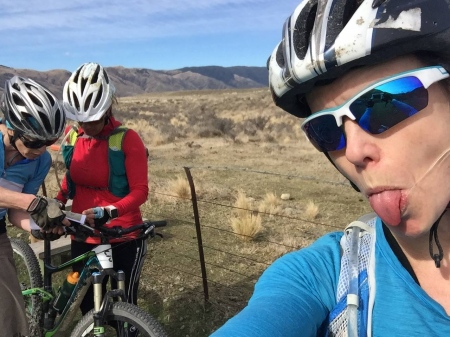 We sometimes take our training seriously

We, team Hiking New Zealand (Anne, Michelle and myself- Claire) needed a long training session ahead of our 9 hour girls Spring Challenge adventure race which will be held later in September.  Much to our surprise, and delight, our husbands suggested they plot a secret course for us, at a mystery location.

It remained a mystery for a few days until Anne discovered an email (accidentally looking at her husband’s emails!) to Ohau Lodge, lifting the shroud of secrecy - that was until the location was changed.

A couple weeks out we knew we were now heading to Murchison, to snow, rivers and bush clad hills.  A lot of spare clothes were packed as we knew there was snow in the hills but didn’t know how much. The forecast was great but we always pack conservatively in case someone gets injured and we are out there for longer than expected.

On arrival in Murchison on Friday night our route was revealed.  There were maps pinned to walls, transition points marked and a general buzz that our husbands wanted us to commit to this day 100%. The route was equally balanced between hiking and mountain biking and we were excited about exploring new terrain.  Brent and Dan had been up the day before investigating some of the biking options in case they were too crazy or unsuitable… it was also their chance to get in a little riding themselves. Dan, with his safety officer hat on, also wanted to check he was not sending us into the unknown too late in the afternoon.

Saturday dawned and we began our first stage as the sun came up – a climb up to Mole Saddle via the ridge and a descent back to the start point, via the valley and past Mole Hut. 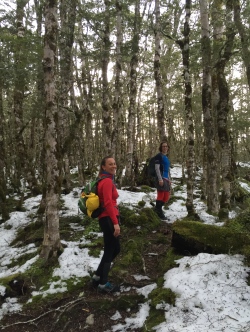 This section was the unknown as neither our husbands nor ourselves knew how long it was going to take. The Department of Conservation sign said 4 hours to the saddle (presumably with no snow) so we set ourselves a deadline of 3.5 hours to reach the saddle otherwise we would turn back to ensure we didn’t compromise the rest of our day’s training by spending all day on one hike. A time deadline added a bit of urgency to our pace as we really wanted to complete the loop.

It was a fairy tale forest to start with. We darted through the trees trying to spot the markers which kept us on route as there was no clear track (they were not hard to spot but you did not want to look up too often due to the continuous trip hazards of the forest floor!). 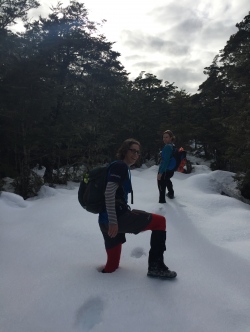 Markers became less obvious and we followed our gut through the forest on a number of occasions, thankfully our ‘gut’ was actually quite good when needed - as long as it was well fed!

After an hour we found ourselves knee deep in snow!  Soon after that it was thigh deep and the pressure was on if we had any hope in completing the loop track. We were laughing hysterically with the sight of each other falling over continuously and shrieking as one minute we remained on the surface then within the next 2 to 5 steps we broke through the surface of the snow and found ourselves thigh deep trying to pull ourselves back out!  It was tiring work, especially for the person in the lead plugging the steps and testing the weight limit of the frozen top layer. We were all very glad for the gaiters our Health and Safety Officer had supplied.

We  continued this way for about an hour wondering to ourselves if we would make our self-imposed cut off and then, much to our surprise, we broke out of the forest and onto the tops.  The snow was firm and we easily walked along the remainder of the ridge to the saddle completing the ascent in 2.5 hours, despite the snow. 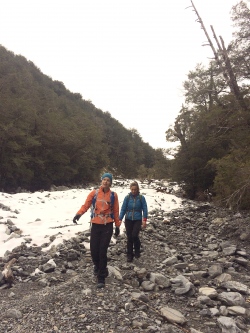 The walk down the valley was reasonably challenging to start with, mainly due to slippery snow atop the messy ground cover of roots, rocks and loose vegetation.  It made for a careful descent but was not at all monotonous.  We broke out onto a river bed approximately a third of the way down and due to the lack of an obvious track through the bush we decided to carry on down the riverbed.  The water level was low but there were signs that the river could get quite high and carry a reasonable volume.  We left the riverbed at a large orange track marker on the left to re-join a small track which was easy going back to the cars (Transition Area 1, aka TA1).  The entire loop took us 4hr 50 minutes, not bad considering the snow cover.

Action Stations at the Transition

Husbands and kids had just arrived at our transition as we approached and they were right on our case ensuring we treated this training day as much like race day as we could, despite the lack of competition – ‘hurry up’, ‘you only have 5 minutes’, ‘it will be hot,’ ‘have you got enough water’…..’blah blah blah’…….and you think women nag!

So, duly on time we left our wonderful Support Crew for our 33 km bike up Tutakaki Road (gravel) and onto Braeburn Track (another gravel road designated a mountain bike route).  The ride was quite pleasant to start with, through farmland and quiet roads but at some point along Braeburn Track it started to climb…..and climb…..and climb!  Every corner another climb loomed!  Our support crew stopped and passed us a couple of times shouting out team management instructions (more nagging!), meaning, as stubborn and competitive as we are, we had to dig it in! Normally a ‘hill embracer,’ coming off a disc injury I was slightly hurting (understatement) and was trying to focus on the end and the relief I would get from getting off the bike and running, as opposed to that sinking feeling of yet another hidden climb! If you had time to stop and ‘smell the roses’, the ride and surrounding bush was very pretty and as a training ride goes it was really good terrain.

We arrived at Lake Rotoroa, our next transition, after 1hr 45 mins of biking.  We quickly adorned running shoes, grabbed some food and went for a quick run around the Braeburn Walk loop with a side trip to a waterfall.  We had to take a photo of the waterfall to prove we had got there….mmmm interesting trust issues eh boys? I don’t know what I was thinking but I grabbed an egg roll for the fastest run of the day. I choked and inhaled bread the entire way round and was still grasping 80% of the roll when we finished the run 30 minutes later!

Back at TA2 we had the choice of a hike up the hill or a ‘push’ bike up the hill. So, in the spirit of adventure racing we chose the latter. 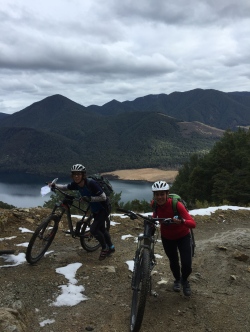 The route involved a steep hill climb up Porika 4WD Track and then a ‘sweet’ descent to Howard Valley Road which we then followed to join the main road to St Arnaud.  The husbands had biked this route the previous day and warned us it was steep and that after a few hours exercise we would probably be pushing all the way! Of course, we had to prove them wrong and did in fact get to ride up it for about….oooooh…. 100m!!!  There wasn’t much talking amongst the three of us but it wasn’t that bad and we did remember to stop and look back at the fantastic view over Lake Rotoroa.  It took just over an hour to reach the top and then began a smooth descent which was great fun!  It was rocky and rutted in some places but if you chose your line well you had a rewarding fun and fast descent (just remember to turn your suspension on!).

After an amusing encounter with some locals in a 4WD, who wanted us to come and cook scones for them at their hut (as muddy and stinky as we were), we then had about another hour’s bike to St Arnaud.  After leaving the gravel road we turned onto the main tarsealed road and started draughting (taking it in turns at the front of a single file) down the hill towards Lake Rotoiti.

The home stretch was physically uneventful but mentally our minds were thinking cold beer, salty chips and lemonade.

Almost 10 hours exactly after we set off we arrived at picturesque Lake Rotoiti (St Arnaud). Our barefoot and muddy kids, and very patient husbands, all cheered us to the finish line – the jetty.

There was no cooling off tired muscles in the water as beneath the jetty the lake eels were swarming along with a collection of ducks patiently waiting to be fed some scraps. A very rare and beautiful Mandarin duck was amongst the motley crew of mallards. One of the 7-year-olds surprised complete strangers, and her parents, with her ornithology knowledge as she casually identified the beautiful duck, a quick search on google proved she knew her stuff.

We informed our husbands that it was great to finish on a nice gradual downhill only to be asked if we had looked at the river flow!  Apparently, we had been cycling uphill for the last 15 kms. I can only surmise that after pushing for an hour where it got so steep you had to put the brakes on when you wanted a rest to prevent the bike rolling backwards, our heads were somehow compensating. Either that or we had consumed too many energy gels!

Over cold beer, burger and chips we all agreed that the best things about the weekend were

a) exploring a totally new area, and

b) the involvement of our families in what can be a selfish time of year as we approach our race, and need to up the intensity of our training.

A stop in Hanmer Springs on the way home on Sunday allowed the husbands another opportunity to get some biking in themselves and us Mums to spend some time with our children. No trip to Hanmer is complete without a hike up Conical Hill, regardless of whether you have done 10 hours of exercise the day before or not. The children charged up the hill in race-like fashion, some in bare feet and others in socks, off track and slightly off route!  Maybe these kids are the next generation of slightly ‘tougher’ adventure racers and we will be the ones dishing out the instructions and words of encouragement.

Thanks again to Dan, Hamish and Brent for organising a fantastic weekend!

Keen to go on a custom adventure?