My amazing time on the Northland Discovery *Part 1*

Read the first part of his Northland Discovery adventure "Cow piles are the same anywhere you go" below: 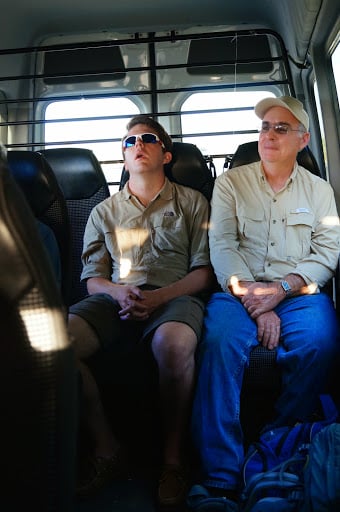 Cow piles are the same anywhere you go..

"Today has been one of the best days of our trip so far. We hooked up with our other 11 hiking comrades to begin our escapade through the Northland of New Zealand. I can already tell that I like it here better than Australia just because of the landscapes and potential of outdoorsy things to do. The grassy green, rolling hills of New Zealand filled with homesteads scattered across them is one of the most picturesque scenes you’ll ever see this side of the Mississippi. On our way to Russell we stopped off at a couple walking trails. Our first stop was the Waipu Cave which showcases glow worms that get brighter when you make more noise. They were very interesting to see. Basically, the ceiling is covered in a bunch of green dots and apparently their light is suppose to attract flies to a web around it. Unfortunately, I was unable to get a picture though due to the camera not being able to focus down in the dark cave. After that we headed for Smugglers Cove at Whangarei Heads where we had lunch and went for a short 1.5 hr walk. The rain was coming and going so I didn’t take the camera, but I did snap some photos on my iPhone. 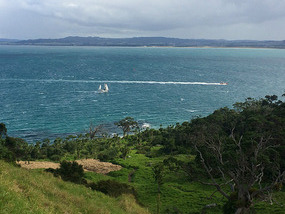 The walk had the bay on one side, the ocean on the other, and wound around the mountains in between. It was literally though a cattle farmers ranch with cows coming and going as they pleased. About half way through the trail after we had stepped over and around about 500 cow patties, dad turns to me and goes "I'll tell you one thing, cow piles are the same thing anywhere you go son. A lot of things change, but a cow pile is the same everywhere.” Although this may be true, I’m kinda glad no one else was around to hear that but me. I think we already got enough about us letting folks know that we are from the country in the Deep South. No need to just keep piling it on if you know what I mean.

On the drive on up toward Russell, we had the pleasure of seeing not one but two rainbows, and the second one was a double rainbow. This was the first time I can ever remember seeing a double rainbow. Who knew I’d have to come all the way to New Zealand to do it. I actually just learned a few weeks ago (don’t ask why) that double rainbows are caused by light being reflected inside the rain droplets twice instead of just once like what happens with a single rainbow. Double rainbows also always have a bright (primary) and a dimmer (secondary) rainbow, and the colors of the secondary rainbow are always the reverse of the primary. That is in a normal rainbow the colors appear top to bottom in the order we all learned in school ROY G BIV (Red, Orange, Yellow, Green, Blue, Indigo, Violet) and the colors of the secondary rainbow start with violet on the outside and end with red on the inside. Even at 26 years old, it’s really a fascinating thing to see if you’ve never seen it before.

Over supper we got to know our new family for the next 5 days a little better. We’ve one older lady from Wales, an older couple from Brisbane, a family of 4 with 2 boys ~10-11 years old from Sydney, one woman from Toronto, and then 2 guides - one that was born and lived in Oregon for about 20 years then came here and one that was born in Poland, grew up in Germany, and is just about to graduate school from the Netherlands and has gotten a job with Hiking New Zealand after completing a 10 month internship here. 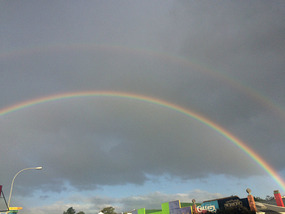 Some interesting things we learned about New Zealand and AU from them is that chocolate milk just now became widely available in stores in NZ and they sell out the day it comes in, there’s only a few places you can get homemade ice cream in AU and folks wait 45 min to an hr at a homemade ice cream shop to get a bowl, hunting is promoted widely in NZ but not so much in AU, and guns are easy to get in NZ and extremely hard to get in AU. In New Zealand, you just register yourself (vs registering each gun like we do in the U.S.) and then you can buy a gun after someone comes out to your house, interviews you and your neighbors, and does basically a mini psych eval on you.

Let us then be up and doing, and doing to the purpose; so by diligence shall we do more with less perplexity.” -From Poor Richard's Almanac by Benjamin Franklin"

Create your own amazing experience now