Each of us gets to make a case for a cause we are passionate about and then as a team we decide where we will donate our funds. With over $85,000 already donated since the company began we really have made a difference and allowed “conservation to benefit from tourism” – one of our founding principals.

One of the projects we are supporting this year involves sponsoring three brown kiwi. This project is run by the Behavioural Ecology and Conservation Group and is the longest running research programme on kiwi in New Zealand after that of the Department of Conservation (DoC). Since 2004 this group supported by Massey University and the Chamberlin family have been discovering the basic biology and behaviour of kiwi in addition to dealing with conservation questions, while DoC’s research is directed to conservation exclusively.

We need to decide which three brown kiwi to sponsor. We have whittled down the selection process and now need to decide between the following six kiwi at our meeting on the 14th of December. We welcome your suggestions.

I have been in this study from its inception in 2004. I was named after Lee Shapiro’s girlfriend at the time, a lovely girl called Anne from some overseas nation. I am the skinniest of the girls in this study, but I am not anorexic, just naturally slim. I am mother to Jules, a beautiful boy who dropped his transmitter and is no longer part of this study. I am mated to Jenno, the bestest partner ever and we live in a pretty bush area in Pipe Gully where we have many houses including Anne’s Palace, our huge tree mansion. 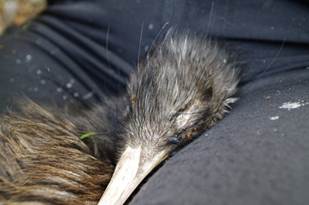 I joined the study at the very start, 2004. I was named after Jen, Murray Potter’s Labrador and Eco’s sister, who found me. I live in the centre of Pipe Gully and I am one of the birds that breed every year. I have always mated with the same girl, Anne, we have produced many babies over the years. She adores me and we are always together in the same burrow. When I am on a nest she roosts in a nearby burrow to keep me company. She’s lovely to me. I never want to leave her side. 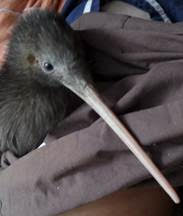 I have been in this project since 2012 when I was with Bel. Unfortunately the scientists that gave me my original name were from North America and called me Taco because I was found with Bel… you know, Taco-Bell? I don’t know why the scientists found that funny, neither did Isabel, so she changed the spelling of my name to Tako to make it Maori. I am not sure that was that great either as tako means “gums or palate”. Isabel reckons this is good as all the members of my bird group have a special palate that gives us our scientific name Paleognathous. I personally think that they should have called me Rangi Takō, which means clear sky… Oh well, so it goes! I adored Bel, and stayed by his side and put up with his eccentricities but with time I had enough. So I set out to travel and put some distance between us. Now I live over in the hills at Kauri Bush, looking for love once again… That poor, newly single Roy Tane looks very handsome. Maybe I will make him an earthworm pie and go over to introduce myself… may be Tweety will join us… 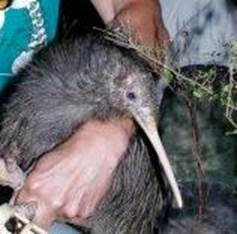 I am one of the original birds from 2004, named after Jono Clark from EcoQuest. I had an amazing life with my partner Birgit, but that all came to a horrible halt in 2011 when Ivan the Terrible and his wife, Octavia, stole my nest with my darling eggs and all. Ivan is a bully and I have been wandering the gullies since they booted me out. I have no home, no burrow, and no girlfriend. I was never a big bird, but now, I am slim as! I am a runner like my hero Usain Bolt. Someday, I wish to compete in the Olympic races and represent the KIWI. For now I get all my training done by running from the scientists all day and all night and make it as painful as possible for them to catch me… Every day I train, I am closer to my goal. I wouldn’t like to be sponsored by Puma, like Usain, because we Kiwi don’t like cats! I wonder if I can get sponsored by Nike to compete? 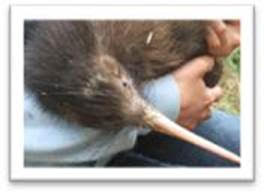 Octavia and I joined the study in 2011. There has been uproar from moment one because we moved into Jono’s nest. But what do you expect? We were neighbours… we muck around… one thing leads to the next. Fact is that Octie and I are top kiwi and so what if Jono and Birgit were weak? Not our fault. I stand by my kiwi girl, she’s tough and beautiful. 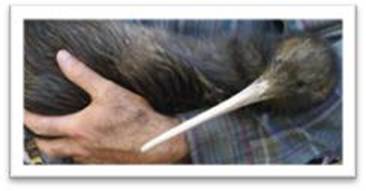 I am the meanest kiwi on the block. I huff and I puff and my talons are like T-rex claws! If you are scientist, volunteer or student, be ready to be marked by me!

Anyone can sponsor a brown kiwi, please contact us for details!