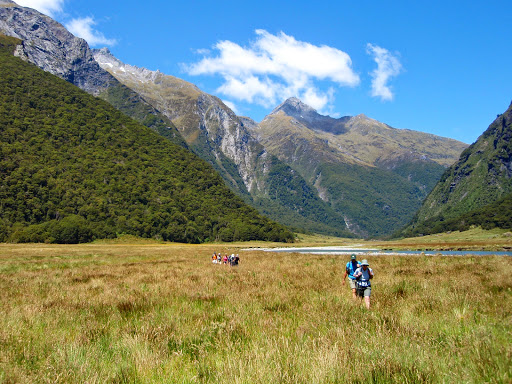 Hiking through the landscapes of New Zealand is a splendid experience. However, good companions and a storyteller who can recount the tales of endurance and fellowship upon which New Zealand was founded complete the experience.

Fiordland’s glacially sculpted landscapes are an allure to the modern tourist. But the bountiful population of New Zealand fur seals was its original draw.

It is 1792 and the first sealing gang to land in New Zealand is dropped in Dusky Sound and farewelled with an unconvincing assurance that the ship will return for them. Faith in this promise was clearly lacking among the sealing party. Remarkably when the ship did return ten months later the men had built a small sailing ship as well as collected 4500 skins.

Being stranded on a beach in Fiordland must have been a tough life, for as Richard Henry (sawmiller, rabbiter, explorer, conservationist) so aptly described in 1896: “this is fine country for the waterproof explorer.”

The hiking on the drier east of New Zealand’s Southern Alps is a remarkably different experience. Hiking New Zealand explores a number of different routes through these savannah grasslands and beech forests.

One of these, a beautiful valley cradled by mountains lies below New Zealand’s highest peak Aoraki/Mt Cook. In 1894 with its summit yet to be scaled, New Zealand climbers received word that an English mountaineer FitzGerald was coming to make the first ascent.

That was never going to fly. The threat of conquest by a foreigner motivated kiwis Fyfe, Graham and Clarke and they triumphantly scaled the monarch of the Southern Alps on Christmas Day that same year. In a fit of pique FitzGerald refused to attempt Aoraki/Mt Cook during his visit. However, he and his Swiss guide Zurbriggen did manage to knock off the second highest peak of Mt Tasman.

Have you been hiking in New Zealand lately? It is a country awash with grand vistas. But the stories behind these landscapes are just as incredible.

Hear some of these stories on a trip now